What Happens When One of the Neuroglial Cell Types is Damaged? 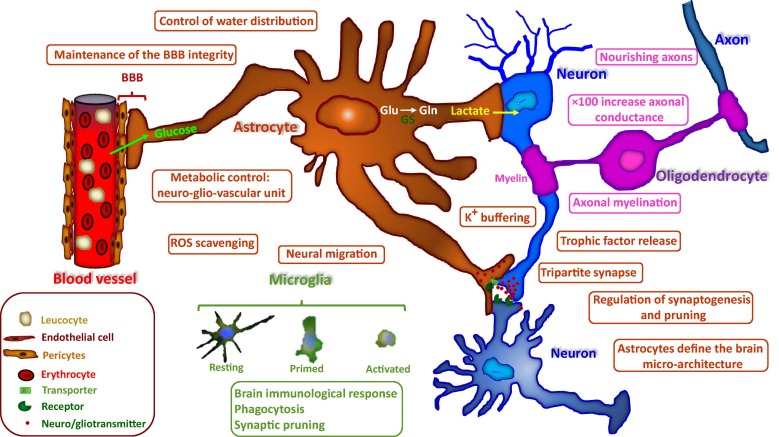 What are the 4 types of Neuroglial cells?

Neuroglial cells are the most abundant cell family in the central nervous system. They are responsible for ensuring the proper functioning of neurons. They provide structural and metabolic support to neurons. These cells also help maintain homeostasis within neurons. Unlike neurons, glial cells do not propagate action potentials or have a membrane.

Neuroglia is a central topic in neuropathology. Recent advances in molecular biology, genetics, and immunology have provided hope for treating glial tumors. Almost every type of brain disease or injury triggers reactive changes in glial cells. These changes can be detected through modern neurosurgical techniques and brain imaging.

Neuroglia support neurons by providing a specialized support network for them. Think of them as the janitorial staff or secretarial pool for the nervous system. They are necessary for normal brain functioning and have a specific role in the central nervous system.

What happens when glial cells are damaged?

Glial cells play an important role in the brain. They help guide neural growth and maintain the synaptic connections between neurons. The discovery of specific molecules used by glia could be a key to developing treatments for neurodegenerative diseases and conditions such as paralysis.

Radical glia are the precursors of neural cells, and they develop from the brain’s neuroepithelial cells. These cells produce neurotrophic factors and regulate neurotransmitter uptake and release. They also maintain synaptic integrity. Damage to glial cells can lead to BDDs.

Glial cells are responsible for maintaining a pool of myelinating cells throughout life. Microglial cells are also involved in neural development. They contribute to neuronal plasticity and secrete glial factors that regulate synaptic transmission. The loss of neuroglial function has been linked to ageing and neurodegenerative diseases.

What is the myelin sheath formed by?

The myelin sheath is made up of a large layer of plasma membrane that wraps around a nerve axon in a spiral pattern. The myelin sheath is formed by cells called oligodendrocytes in the central nervous system and Schwann cells in the peripheral nervous system. Each myelin-generating cell provides myelin for one segment of an axon. The sheath also helps to increase the speed at which electrical signals can travel down the nerve axon.

Axons in the central nervous system undergo limited regrowth, while peripheral nerve cells exhibit a higher regrowth rate. This is due to the lack of a neurolemma. However, the myelin sheath surrounds each axon and insulates it, improving its speed of action potential propagation.

What is the main function of a microglial cell?

Microglia are immune cells found in the central nervous system (CNS). They protect the CNS by releasing molecules called cytokines. These molecules have receptors on cell membranes that trigger immune responses in recipient cells. In addition, microglia also produce chemokines, which regulate cell migration and spatiotemporal positioning of target cells. These molecules also play a role in apoptosis and microglia-mediated phagocytosis.

Microglia are specialized macrophages that are found primarily in the brain. They represent approximately 10% of the total number of brain cells and are derived from neural stem cells. The main function of these cells is to maintain a healthy brain environment by performing essential maintenance functions. They help remove damaged neurons, ensure uninterrupted communication between neurons, and clean up protein aggregates that accumulate in the brain during neurodegenerative diseases.

What are the 4 main types of cells in the brain?

Neurons are specialized cells that contain one axon and multiple branches. They are found throughout the central nervous system, including the brain and spinal cord. One type of multipolar neuron is the Purkinje cell, which contains many branching dendrites and one axon. Both types of neurons are multipolar, but they serve different functional roles. The shape and size of each type affects its functional role.

Oligodendrocytes line the length of axons throughout the central nervous system. They produce a fatty substance called myelin that protects and insulates these nerve fibers, which helps them conduct electrical impulses more efficiently. This material also speeds up the conduction of signals and prevents random spread of these signals. Oligodendrocytes also line the spinal cord and are involved in the formation of cerebrospinal fluid. Oligodendrocytes are also involved in the production of astrocytes and neurons.

Microglial cells participate in the development of the brain and provide protection by removing pathogens and harmful toxins from the area. Microglia also play a crucial role in brain development, as they migrate to sites of injury and remove debris. Oligodendrocytes, meanwhile, produce a fatty substance called myelin, which acts as a protective sheath around axons. This material is essential in the brain because it promotes faster transmission of electrical impulses.

What is the function of Neuroglial cells quizlet?

Neuroglial cells support neurons and provide a necessary environment for them to grow and thrive. They are made up of four distinct types, each performing a different function in the central nervous system. These cells include ependymal cells, which circulate cerebrospinal fluid, oligodendrocytes, which serve as insulators for the axons of central nervous system neurons, and astrocytes, which help regulate the chemical environment for neurons. Lastly, microglial cells protect the CNS from dead cells and infectious microorganisms.

Neuroglial cells support neurons by providing nutrient support, promoting the conduction of electrical impulses, and maintaining homeostasis in the brain. They are found in both the CNS and the PNS. They also support neurons by promoting the formation of the myelin sheath, which wraps around axons to help them conduct electrical impulses. This type of cell also helps maintain the balance of neurotransmitters in neurons.

Astrocytes are star-shaped cells that are present in the CNS and spinal cord. They help maintain a normal environment by controlling the levels of neurotransmitters at synapses. These cells also help regulate neuronal activity by releasing molecules.

Which of the following is a Neuroglial cell?

The main function of a neuroglial cell is to help nerve cells function properly. The three main types of neuroglia are oligodendrocytes, astrocytes, and microglia. All of these cells are found in the brain.

Oligodendrocytes are specialized cells found in the central nervous system, and they act as insulators for axons. They develop from precursor cells in the ventral ventricular zone, and their processes become flat sheet-like structures that wrap around individual axons. These cells typically cover a small segment of an axon, leaving gaps between the adjacent segments. In addition, oligodendrocytes contain many Na-ion channels and are important for the saltatory conduction of action potentials.

What glial cells are damaged with MS?

Multiple sclerosis, or MS, is an autoimmune disease in which the immune system attacks the healthy tissues in the central nervous system, including the glial cells that surround nerve cells. This attack damages the myelin sheath, which is critical for the nerve cells to transmit electrical signals. The myelin sheath surrounds each neuron, which contains long fiber-like projections called axons. Damage to the myelin sheath leads to damage to the axons and deterioration of the central nervous system.

There are several types of glial cells in the central nervous system, including oligodendrocytes and astrocytes. The glial cells surround the axons of neurons and produce a fatty substance called myelin. This sheath protects neurons from damage and enables electrical signals to travel much faster. In MS, the glial cells in the central nervous system become damaged, and the axons of these neurons are damaged.

Several recent studies indicate that glial cells play important roles in MS pathogenesis. They play crucial roles in neurodegeneration and remyelination, and are the target of immunosuppressive therapies. However, the role of glial cells in MS has not been completely understood. Thus, only a limited number of effective therapies exist to restore CNS function in adults suffering from MS. However, remyelination, a spontaneous process that restores nerve tissue, is a promising novel approach to treating MS.