Integrative Approaches to Psychology and Christianity by David Entwistle 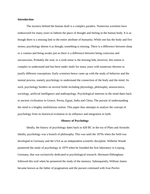 What are Entwistle six models?

Entwistle developed six models for the relationship between psychology and religion. Each model represents a different way to conceptualize the relationship. These models reflect the different ways in which people view the importance of religion and the role of psychology. Some models focus on the role of religion, while others reject it altogether. Some models are more important to theology than others. For instance, the Spies model focuses on religion as its primary focus, while the Enemies model rejects it entirely.

Entwistle’s models reflect this conflict between religion and psychology. These models differ in terms of their approach to Christian psychology. Some models are based on biology, others on behaviorism, and others on theology. The Allies model focuses on the role of both disciplines. It’s important to recognize that both disciplines can offer useful insights, but it’s also important to recognize the limitations of both.

One of the strengths of Entwistle’s book is that it addresses personal integration, offering application exercises for the student to learn and apply the concepts. The book offers a comprehensive overview of the field, as well as a readable and accessible guide. It also includes personal accounts and perspectives of several of the leading psychological researchers in this field.

What is integration according to Entwistle?

Interestingly enough, Entwistle argues that integration is both a verb and a noun. According to him, the best way to understand integration is to look at history and find the philosophical underpinnings of both sides of the discussion. For example, there are correlations between religion and science, so it is likely that faith and science can work in concert.

While Entwistle’s model for integration is admirable, it is not without its problems. For example, the Allies model of integration, which he champions, tends to overemphasize reconciliation while undermining the gospel message. Entwistle attempts to balance the priorities of theology and psychology. He argues that while theology is more important than psychology, neither has primacy because both disciplines are grounded in the truth of God.

According to Entwistle, the integration model of psychology and Christianity is a hybrid of the two. He believes that both psychology and religion lead to the same place.

Who is the father of Christian psychology?

In Integrative Approaches to Psychology and Christianity, David Entwistle explores the historical conflicts between religion and science. He also explores the principles that bring science and faith together, and the ways in which they diverge. While psychology and religion share the same goals, they differ in their worldviews and the methods they use. As a result, there are a variety of models explaining their relationship.

The book is a comprehensive treatment of the topic. It is particularly useful for students studying psychology and Christian faith and practice. Entwistle offers an excellent overview of current research in this area and includes application exercises aimed at helping the student grow as an individual. Furthermore, the book highlights the diverse perspectives of key scholars from various Christian traditions.

Entwistle notes that psychology and Christianity share the common interest in human beings. Therefore, they have similar principles of appreciation and comprehension. In his book, he outlines five possible relationships between the two. He also provides a brief survey of the literature on the topic.

Can psychology and Christianity be integrated?

Psychology and Christianity have often been thought of as separate disciplines. Yet they can often be related in important ways. For instance, some psychologists have argued that Christian theology provides a solid foundation for studying psychology. In the real world, the boundaries between these disciplines are often fuzzier, and they are often a result of the context of the discipline.

However, integration is not an easy task. The authors present their points of view with humility and provide convincing arguments for both sides of the debate. They use examples from both fields to illustrate their view-points. The chapters on Christian Psychology, Biblical counseling, and Transformational Psychology each illustrate their arguments with practical examples. In addition, the book also contains helpful resources. For example, the book’s bibliography lists several books and resources that may prove useful for Christian psychologists.

Psychologists must understand that Christian psychology cannot replace Christianity. As such, it must be integrated with Christian faith. It is possible to integrate these two disciplines, but it takes discipline and a desire to serve God.

What is the main premise of the Enemies model?

The Enemies model is a theory of religion that holds that psychology and religion are fundamentally incompatible. Its main premise is that religion sabotages mental health. As a result, the Enemies model seeks to eliminate these systems through eradication and rejection.

What is the study of psychology called?

Christian psychology are closely related. Both emphasize the role of God and the human soul, but their approaches to these issues are distinctly different. Psychology focuses on the mind, while Christianity emphasizes the role of the conscience. In the field of psychology, Christians have a long history of thinking and practicing about human nature. As a result, followers of CP often identify numerous authors throughout Christian history whose works discuss the human condition.

Who is St Augustine in psychology?

Augustine was one of the first psychologists of the ancient world. He outlined the nature of the human mind and how it interacts with the divine. His work helped to form many of the fundamental principles of contemporary psychology. He described the inner nature of the human being, exploring the nature of desire, motive, and self-consciousness. The result of his research has been used in a variety of fields, including psychoanalysis, psychotherapy, and existential philosophy.

Augustine was a great advocate of human freedom. He also was a passionate defender of divine predestination. While his views on sexuality were humane in intent, they have been seen by some as oppressive. But that hasn’t stopped many from reading his books and learning about his teachings.

In the Confessions, Augustine addresses some of the most pressing issues of human life. These include family relationships, memory, conversion, the place of sexual renunciation within religion, time, and death. He knew how to capture the imagination and attract readers.