How to Relieve Pain in Your Splenius Capitis 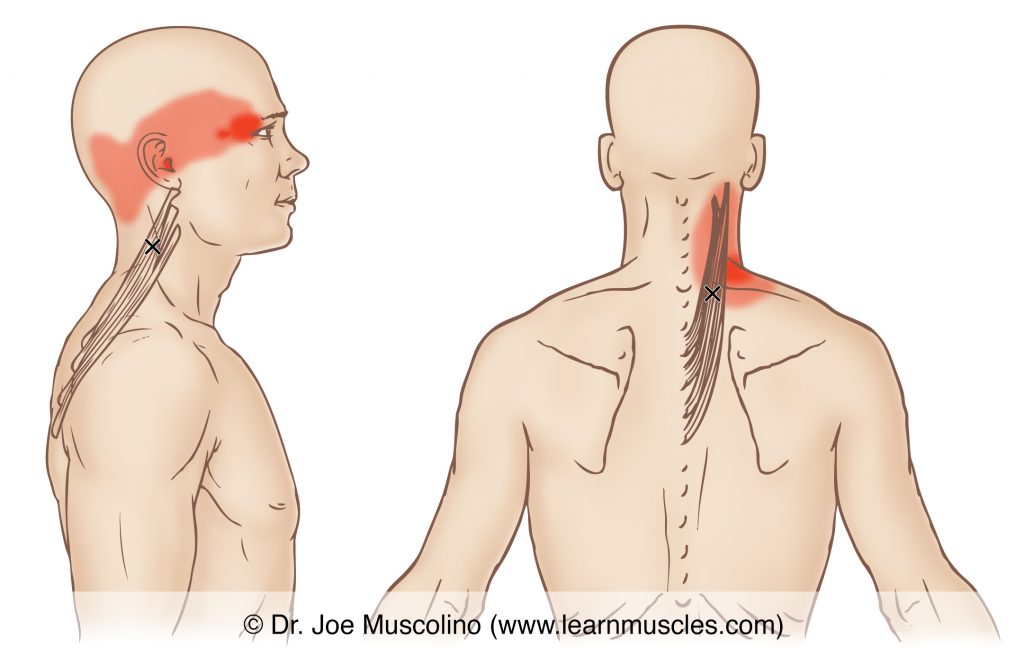 So, you’ve been wondering: “How do you relieve pain in your splenius capitosis?” This article will explain why this muscle can be so painful and how to release it. First, let’s look at what makes this muscle so tight.

Why does my splenius capitis muscle hurt?

If you’ve ever had a head or neck pain, the problem might be the splenius capitis muscle. This muscle connects the skull to the neck and extends the head and vertebrae. It can be affected by whiplash or poor posture. It can also be a cause of a headache if it is tight.

Splenius capitis muscle pain may be associated with a variety of symptoms, including neck pain, headaches, and migraines. The pain is caused by inflammatory changes in the area of the muscle’s attachment on the occipital ridge. It resembles the pain patterns associated with migraine headache and temporal tendinitis. This pain can also be caused by blunt trauma or motor vehicle accident injuries.

How do you relax splenius capitis?

Achieving relaxation of the splenius capitis muscle is crucial for neck pain sufferers. It helps stabilize the neck, allowing the head to rotate properly. Various factors, including incorrect posture or whiplash trauma, can cause pain in this muscle. This muscle is attached to various parts of the cervical spine, including the Atlas and Axis bones.

Acute and chronic tension in these muscles can cause head, neck and vertex pain. It is most commonly associated with whiplash trauma, but many people also experience it after working at a desk for long periods. Self-massage can help relieve neck pain and eliminate tension. Anyone can learn how to work on the splenius muscle and eliminate pain. The first step is to learn the attachment points and functions of this muscle.

The Splenius capitis muscle is a large, broad muscle located deeper within the back of the neck. It originates from the spinous processes of the last cervical vertebra and the first three thoracic vertebrae. It ends near the base of the occipital bone. When stretched, it is responsible for supporting the head in an upright position.

The splenius capitis muscle is a postvertebral muscle that controls posture and movement in the spine. Located on the lateral side of the C7 vertebra, it allows the head and vertebrae to extend. Tight splenius capitis can be caused by a whiplash injury or a bad posture.

People with splenius pain often experience pain in the neck, head, and vertex. The symptoms can mimic those of migrane. This muscle is part of the postvertebral system, which includes the neck, back, and scapula, which run laterally along the spine.

How do you release splenius?

During a whiplash injury, the splenius capitis can become inflamed. This muscle attaches to the back of the skull under the ear lobe. It acts in unison and unilaterally to bend the neck and head, and helps the vertebrae extend and rotate. In cases where the splenius is inflamed, massage may be a good option.

Massage peanuts can be used to massage the neck and shoulders and the splenius capitis region. A massage wand head can also be used, especially on tender areas. The massage wand should be held with the head facing backwards or turned toward the painful side.

Another common symptom of splenius capitis is neck and facial pain. The pain often mimics the symptoms of a migrane. This muscle is a deep part of the back and neck that runs laterally along the spine.

How do you stretch your splenius capitis?

If you have pain in the splenius capitis, you can try a few stretches to relieve your pain. You can start by trying the chin-to-chest stretch. This exercise uses the muscles of the upper back and posterior deltoids to stretch the splenius capitis. When performing this exercise, you should be sitting upright. Put your head toward your chest, and then use your hands to hold the position. You should hold it for 30 seconds. If this does not relieve your pain, you may want to seek massage therapy.

You should also try stretching the neck muscles. These muscles are attached to the base of the skull, so find the bump that feels tender and pull down into the side. Repeat this motion three times. Eventually, the stretch will become habitual. By following these steps, you will be able to relieve the pain in your neck.

When performing this stretch, remember to do it gently and hold it for 15 to 30 seconds. The goal is to create tension but not pain. If the stretch doesn’t help, consult with your physician or physical therapist.

How do you strengthen splenius capitis?

The splenius capitis muscle is a key postvertebral muscle that controls the movement and posture of the spine. By strengthening it, you can prevent the development of neck and upper back pain. However, it’s important to see a doctor before beginning any exercise routines.

Tilt your head to the side while keeping your shoulders relaxed. Use the massage wand to apply pressure to tender areas of the splenius capitis muscle. Then, hold the wand to your head for about 2 minutes. This may seem like a long time, but it will help relieve the pain.

If you’re suffering from a neck pain, a chin-to-chest stretch can help. This stretch will work your splenius capitis while stretching the posterior deltoids. The head should be slightly lowered and your hands should be on the head. The fingers should be just above the skull bone. Repeat this stretch three times.

How do I know if I have splenius capitis?

Acute neck and head pain is a common symptom of splenius capitis. This condition is a result of an injury to the splenius capitus muscle. Treatment options vary depending on the exact cause of the pain. Treatment can include behavioral therapy, clinical techniques, and surgery. Self-massage is an excellent way to relieve pain in splenius capitis. Learn how to massage the splenius muscles to reduce muscle tension and inflammation.

Try massaging the neck and shoulders with massage peanuts. Your partner can also use this technique. If you’re not comfortable using massage peanuts, you can use a massage wand. Put the massage wand head over the splenii muscles and work it into the tender spots. Maintain pressure for about 2 minutes.

If you’re unable to do a massage, try stretching the muscles around the neck. You should use one hand to hold on to the back of the neck and the opposite hand to pull it into the side. Repeat this exercise several times.

The Semispinalis capitis muscle can be painful if it is overused or overstretched. This can make moving the head and neck difficult. It may also be caused by a tendonitis, a condition in which a muscle in the neck becomes dysfunctional. People with forward-slouching posture, chronic headaches, or occipital neuralgia are at increased risk of developing this condition. Treatment involves relieving the pain and restoring proper neck function. Physical therapy can also help with the condition.

To reduce pain, you can try a stretching exercise. This exercise will strengthen the muscles in the neck and upper back. You can start by attempting to stretch the neck in a standing position. Hold the position for fifteen to twenty seconds. Repeat this exercise 3 times. This will work the neck extensors and the Suboccipital muscles.

A muscle strain or injury to the Semispinalis capitis can result in occipital neuralgia, a type of headache caused by the entrapment of a nerve. This condition is often accompanied by pain in the back of the head, and may even lead to a migraine.