How Does the Digestive System Work With the Endocrine System? 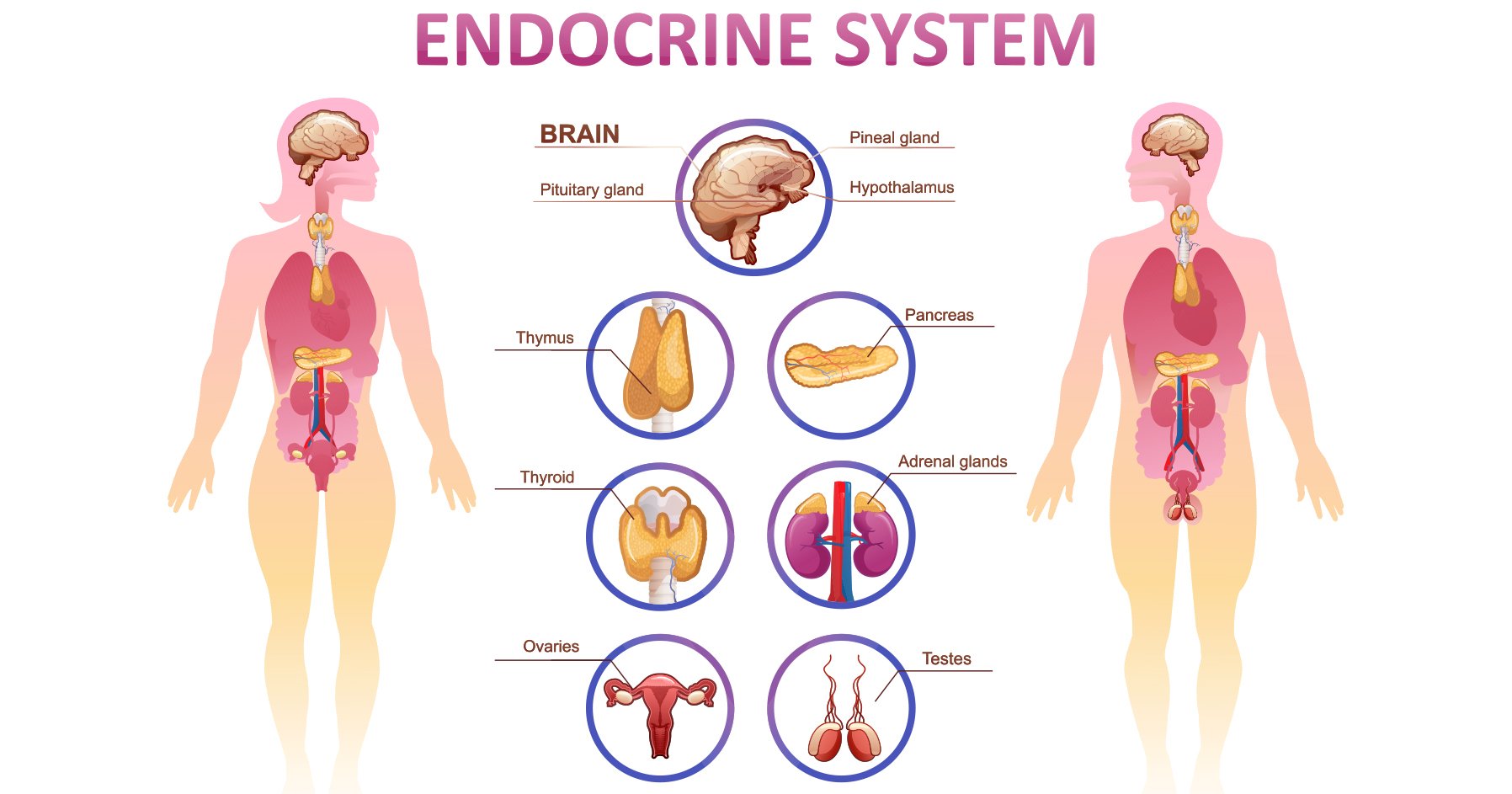 What systems does the endocrine system work with?

The endocrine system controls the biochemical pathways of the body, from the growth and development of an individual to the regulation of the body’s temperature and glucose metabolism. Its primary tool is the hormone, which affects the activity of many organs and cells. Hormones are released by glands and travel throughout the body, altering the activity of other cells and systems. Because endocrine glands are located within organs that are closely related to other systems, the hormones released by them can influence the activity of these organs and systems.

The endocrine system is linked to the nervous system by the hypothalamus, a small organ at the base of the brain that makes hormones in response to information from the brain. This organ is the key to controlling mood, hunger, thirst, sleep, and even sexual function. Another part of the endocrine system is the pituitary gland, a pea-sized gland that controls other endocrine glands in the body.

In addition to its role in controlling metabolism, the endocrine system also helps the body maintain homeostasis. Its negative feedback mechanisms regulate the concentration of hormones in the body. In particular, the pancreatic hormones insulin and glucagon regulate blood glucose levels. Insulin stimulates glucose uptake from the blood, while glucagon stimulates the breakdown of glycogen and releases glucose into the blood. This process keeps blood glucose levels normal and the endocrine system functioning properly.

What hormones influence the digestive system?

GI hormones are complex peptides that regulate a number of gastrointestinal functions. These hormones are released into the bloodstream in response to a variety of stimuli. These hormones bind to specific receptors in target cells. They are also subject to feedback regulation. In some cases, GI hormones may affect neighboring cells and even serve as neurotransmitters in peptidergic neurons. These cells are located throughout the GI tract and the central nervous system. Their action is regulated by different pathways, including the vagus nerve, the CNS, and the hypothalamus.

Besides the stomach, other organs in the body also produce hormones. The thymus, for example, produces thymosin, a hormone that is important for the development of the immune system. The stomach lining also produces the gastrin hormone, which stimulates the production of hydrochloric acid and the enzyme pepsin.

What do endocrine cells secrete in stomach?

The stomach is an open organ with many endocrine cells. They synthesize precursors in the rough endoplasmic reticulum and transport them to the Golgi apparatus where they are packaged in secretory granules. Most of these cells are open in structure, with their apical process covered with microvilli. These microvilli serve as sensory apparatus and regulate endocrine secretion.

Endocrine cells secrete hormones in the stomach and other organs of the body. The thymus, for example, secretes the hormone thymosin, which has important functions in the immune system. Similarly, the stomach secretes gastrin, which stimulates the production of hydrochloric acid and the enzyme pepsin.

The hormone oxytocin is responsible for creating the warm and fuzzy feelings we experience when we spend time with others. This hormone has many names, including the “love hormone” and “cuddle hormone.” It plays a critical role in the development of social bonds and regulates social behavior. While it has many functions, it is most commonly associated with human relationships.

Oxytocin also helps reduce stress and calms people. This means cuddling can help lower blood pressure and cortisol levels. That’s good for the ticker, and it can even help protect against common viruses. Studies have shown that couples who freely cuddle tend to be happier and healthier than those who don’t.

Researchers have found that cuddling with a child boosts overall health. They say it lowers blood pressure, helps reduce stress, and fights sickness. Similarly, cuddling with a pet has positive effects. The secret is the hormone oxytocin.

What is the main work of the digestive system?

During digestion, food particles move from the mouth and pharynx into the esophagus through a series of muscle contractions. These movements are referred to as peristalsis, and they mix food particles with digestive fluids and enzymes.

How all body systems work together?

Our body systems work together to maintain internal stability and balance. When a particular system is in trouble, it disrupts this balance and can cause problems in other systems. The AIDS virus, for example, affects the immune system, and can lead to infections in the respiratory, reproductive, or digestive systems. Other health conditions can result from this virus, such as Kaposi’s sarcoma, which is a type of cancer.

The respiratory system and circulatory system both work together to supply the body with oxygen and remove carbon dioxide. Other organs belong to several systems, but most contribute to more than one system. Although organs are typically studied individually, they all work together to maintain a state of homeostasis.

The human body has 11 different organ systems, each with a complex function. In addition, some of these organ systems interact with one another. For example, the digestive system cooperates with the endocrine system to help control the digestive process. A healthy functioning of these systems is vital to the survival of the organism.

Is stomach exocrine or endocrine?

Endocrine cells are also present in the gastric mucosa. These cells secrete hormones that regulate the function of the stomach and regulate the gastric physiology. G cells, found primarily in the antrum, secrete the gastric hormone gastrin, which modulates the secretion of HCl by parietal cells.

The pancreas is an elongated, tapered organ. The head is the largest part of the organ and lies on the curvature of the duodenum (first part of the small intestine). The body of the pancreas extends upward with a tail near the spleen. The pancreatic duct runs the entire length of the organ. The pancreatic islet contains hormones and enzymes that break down food into small molecules. In addition, pancreatic cells secrete glucagon and insulin when blood sugar levels rise and fall. This helps keep blood sugar levels stable. When there is a lack of these hormones, this can lead to weight loss and diarrhea.

How is insulin related to the digestive system?

The hormone insulin plays an important role in the digestion process. When you consume carbohydrates, the digestive system breaks them down into glucose, which circulates in the blood. When this glucose level rises, the pancreas releases insulin to clean the blood and direct it to the cells for energy. Once inside the cells, glucose is stored as glycogen for use by the muscles.

The pancreas produces insulin and other hormones. Insulin helps the body digest food and helps the cells use it as an energy source. It is produced by beta cells in the pancreas, which make up 75% of the hormone cells in the pancreas. These cells produce insulin to help convert glucose into energy. When insulin is not present, cells are forced to seek other sources of energy.