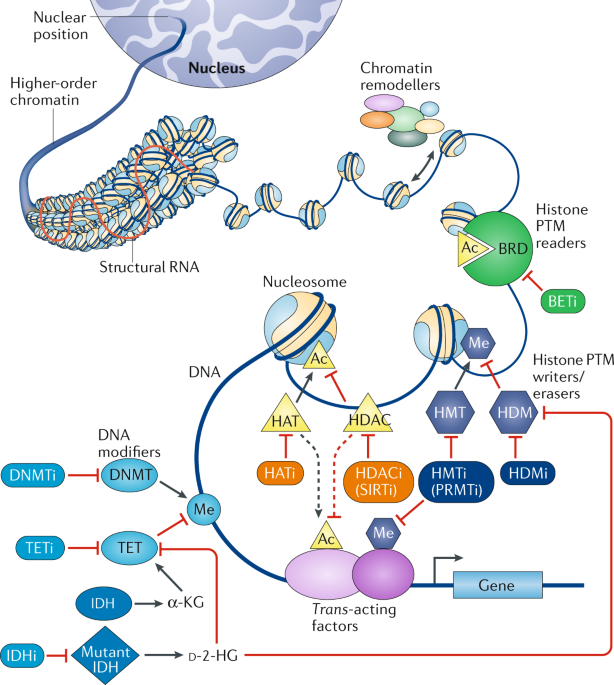 5-Azaacitidine is a nucleoside analog that functions as a ribonucleoside. It incorporates preferentially into RNA via phosphorylation and can also be incorporated into DNA through the ribonucleoide reductase pathway. Its deoxyribose analog, decitabine, incorporates directly into DNA, but at lower concentrations than azacitidine.

How does epigenetics apply to cancer cells?

Epigenetics is the modification of gene expression without altering the genetic sequence, which has wide implications for cancer research. It is an emerging branch of genetics and focuses on the effects of drugs on cancer cells. It can be used to investigate drug sensitivity, determine the most effective therapeutic approaches, and more.

The process of DNA methylation regulates gene expression and has many roles in human development and disease. Various mutations in the enzyme that methylates DNA cause aberrant gene expression. Hence, epigenetics is a promising target for cancer therapies. Several epigenetic drugs have been developed for this purpose, and many of them have shown promising results in various types of cancer.

Epigenetic therapy is a promising treatment that combines conventional therapies with epigenetic therapy. This method has the potential to reverse drug-resistant tumors and reduce drug dosages. Moreover, it improves patient quality of life by reducing side effects.

MLH1 and PMS2 are two genes that play a central role in the mismatch repair complex. They form a heterodimer. The MLH1 protein is a major component of the mismatch repair complex and is crucial for stabilizing PMS2. Without MLH1, PMS2 is very unstable, and PMS2 levels are undetectable in MLH1-deficient cells. Deletion of exon 14/15 in MLH1 in the germline results in a carboxyl-terminal truncated MLH1 protein without the PMS2 interacting domain.

Mutations in MLH1 and PMS2 are often caused by a mutation in a related gene. However, a deletion in PMS2 can occur in cells with haploid DNA. In patients with colon cancer, this mutation causes LOH (Lower-than-Haplozygous) cell division.

What does MLH1 stand for?

MutL homolog 1 is a gene that codes for a protein that is important in the repair of DNA damage. People with mutations in this gene are at increased risk for developing certain cancers, including bowel and bladder cancer. It is also associated with glioblastoma and Lynch syndrome. The MLH1 protein works with the PMS2 protein to direct activities of other proteins. Genetic testing can be used to identify patients with mutations in this gene.

Patients with Lynch syndrome have inherited changes in the MLH1 gene. These changes prevent normal DNA from functioning properly. In addition, mutations prevent the gene from protecting the cells from certain types of cancers. A test for Lynch syndrome will indicate whether a patient has a pathogenic mutation in the MLH1 gene. As with any type of mutation, a pathogenic mutation indicates that the person is at increased risk of developing certain types of cancers.

MLH1 mutations are inherited from both parents, and children with the mutation will have a high risk for cancer. Those affected may want to discuss their family history and ask about genetic testing of their blood relatives. If you are concerned about passing the mutation on to your children, your genetic counselor can help you make decisions on how to prevent the mutation from being passed on to them.

What is an example of epigenetic effect?

Epigenetics refers to the control of gene expression in a cell, particularly during embryonic development. Each human cell contains approximately 20,000 genes, each encoding a specific protein. Different cells need different subsets of proteins, so some genes are switched on and some are turned off. The messenger RNA then translates these genetic instructions into the appropriate protein.

Epigenetic effects can be heritable and can contribute to the fitness of offspring. For example, the methylation of a transposon can result in a unique transcript in inbred mice. Moreover, transposable elements are prone to environmental change, and elevated temperatures alter the expression of piRNAs in Drosophila melanogaster.

Moreover, epigenetic changes occur throughout our lives. In fact, there are differences in epigenetics at birth and during childhood. Some changes are permanent, and others can be added or removed in response to environment and behavior.

What is the role of epigenetics in development?

Epigenetics is a branch of biology that deals with the way genes are expressed. This process can be influenced by early experiences, including the physical environment. Genes are no longer considered “set in stone” and do not necessarily determine a person’s personality or development. Instead, the epigenome is a complex system of physical and chemical processes that regulate gene expression.

Epigenetics also plays a crucial role in disease. These processes are responsible for regulating the expression of genes that are related to a particular disease. For instance, exposure to certain environmental factors can result in altered expression of a disease-relevant gene. In such instances, epigenetic patterns are reliable biomarkers of environmental exposure. The ability to use such data in epidemiological studies may improve our understanding of disease mechanisms.

What is epigenetics and why is it important?

Epigenetics is the study of how genes are expressed and how experiences change their expression. While all cells contain the same DNA, the expression of the genes is determined by the environment. For example, muscle and nerve cells use the same DNA to produce proteins and transport information, but they differ in how they express those genes. These differences can be passed down through generations.

In recent years, epigenetic research has gained importance in numerous fields. From genetics to psychology, it provides a biological basis for the interplay between the genome and environmental signals. Furthermore, epigenetic regulation is important in regulating individual differences in physiology, emotion, cognition, and behavior.

The DNA sequence is the blueprint of the body, but a layer of chemical tags called the epigenome controls which genes are active. The epigenome decodes the information and determines when and where the instructions should be used. It also plays an important role in cancer risk.

What type of cancers are genetic?

5 Azacytidine, or 5-AZ, is a demethylating agent that is used to treat certain types of cancer, including melanoma and leukemia. In a recent study, 5-AZ was found to increase the breakdown of a protein called FITC-gelatin in ovarian cancer cells.

In a study of mice, 5-AZ treatment increased the number of metastatic nodules. Invadopodia are specialized machinery in cancer cells that break down extracellular matrix and aid invasion and metastasis. Epigenetic and genetic factors play a role in regulating the formation of these structures. 5-AZ treatment increased the formation of metastatic nodules in mouse xenograft models, which suggests that demethylation of DNA can increase the potential for metastasis.

What cancers are caused by environmental factors?

Environmental factors play an important role in the development of cancer. They include your genetic makeup, lifestyle, and habits. Although these factors account for a small proportion of cancer cases, they can influence your risk of developing cancer, especially when combined with other outside factors. These factors include cigarette smoking, your diet, and your exposure to contaminated air and water. Tobacco is the leading environmental risk factor for cancer, and it contains over 3,800 chemicals, including more than 40 carcinogens. Additionally, certain types of food and drink are linked to various types of cancer.

Although many environmental factors are associated with increased cancer risk, the number of cases is not as high as some scientists would like. In fact, only about 10% of all cases are directly attributed to environmental factors. Tobacco and diet are two of the most important environmental factors, but there are others, such as ultraviolet and ionizing radiation, medical procedures, and reproductive behavior. The nature of carcinogens makes it difficult to imagine an environment free of them.